Below is an article originally written by Zapier People Team. Go to Zapier's Company Pageon PowerToFly to see their open positions and learn more.

Learn about Zapier's Next Play Program and other initiatives that help Zapier teammates grow in their careers.

Starting a new job is exciting, and we put a lot of thought into how we bring people into Zapier—comprehensive onboarding, swag, and a flurry of greetings. We talk a lot about who's joining our teams, often long before the moment arrives. But when it comes to departures, historically, it was common to have unexpected notices (as little as two weeks) and feelings of surprise or guilt for all involved.

Earlier this year, after losing several teammates, Zapier Business Recruiting Manager Bonnie Dilber had an idea: what if we normalized letting our managers know when we were exploring new roles? What if managers helped their team members with resumes or interview prep and were by their side, helping them land that next role?

It's an awkward conversation, for sure, but should it be?

A few weeks later, Bonnie made an off-hand comment in a public forum that she wanted the Zapier Talent Acquisition (Recruiting) team to start providing this kind of support and was open to anyone reaching out that needed help exploring internally or externally. 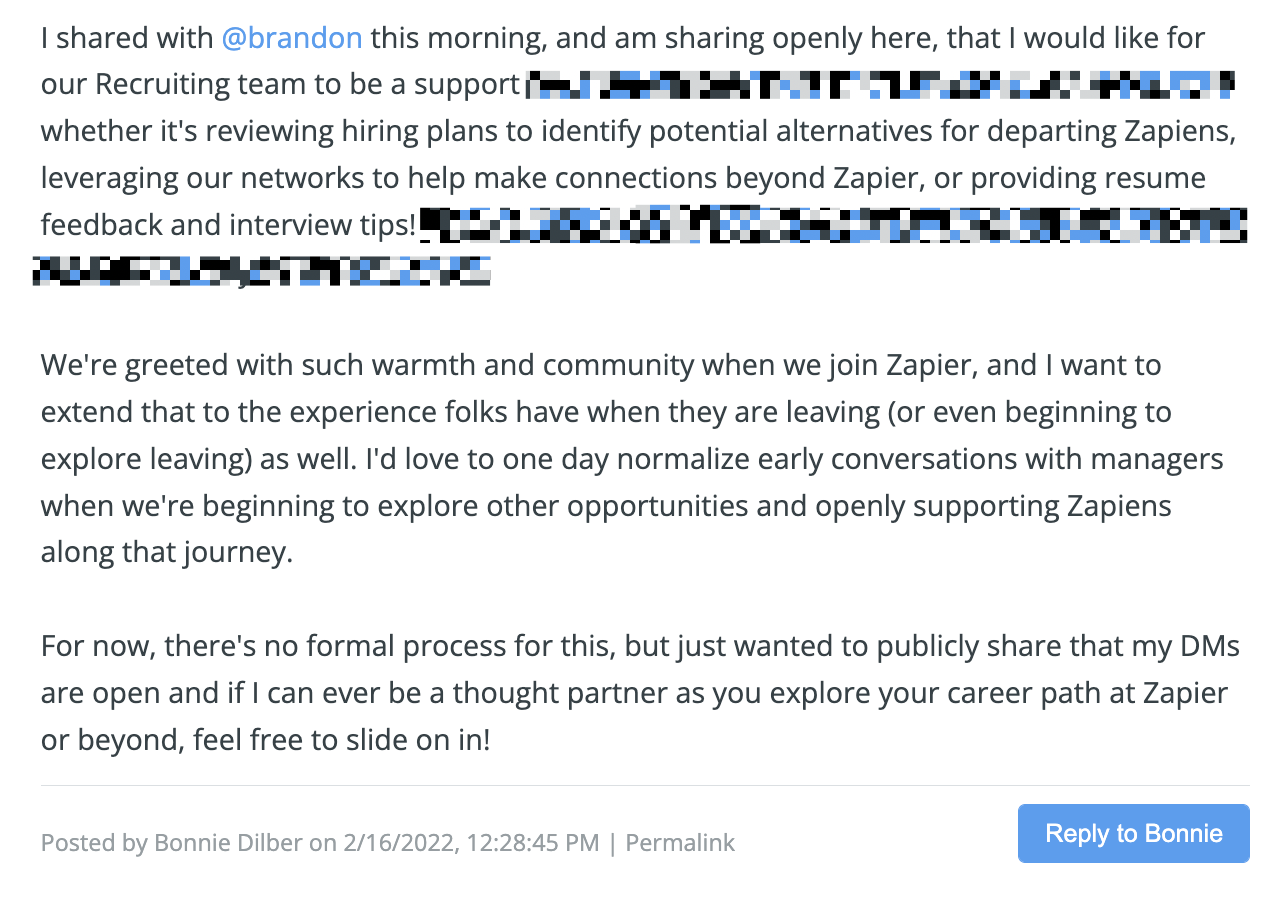 A few people reached out.

We were so thrilled about these conversations and outcomes that we decided to formalize the program.

Our new Zapier's Next Play Program supports any Zapier teammate on their internal or external job search. Yes, this might mean that we help some people plan out their exit strategy. But we're ok with that. It makes our Talent Acquisition team better partners to the departments we support, and we think it will help us to retain our people in the long run. It will open the door to more honest conversations across teams, help us plan for attrition, and support our people to go further faster. And it will make Zapier a better place to work.

Growth plans are the main tool folks use to help think through their next job at Zapier (or elsewhere). We have a formalized (but optional!) growth plan process, which encourages folks to identify goals and how they'll achieve them. 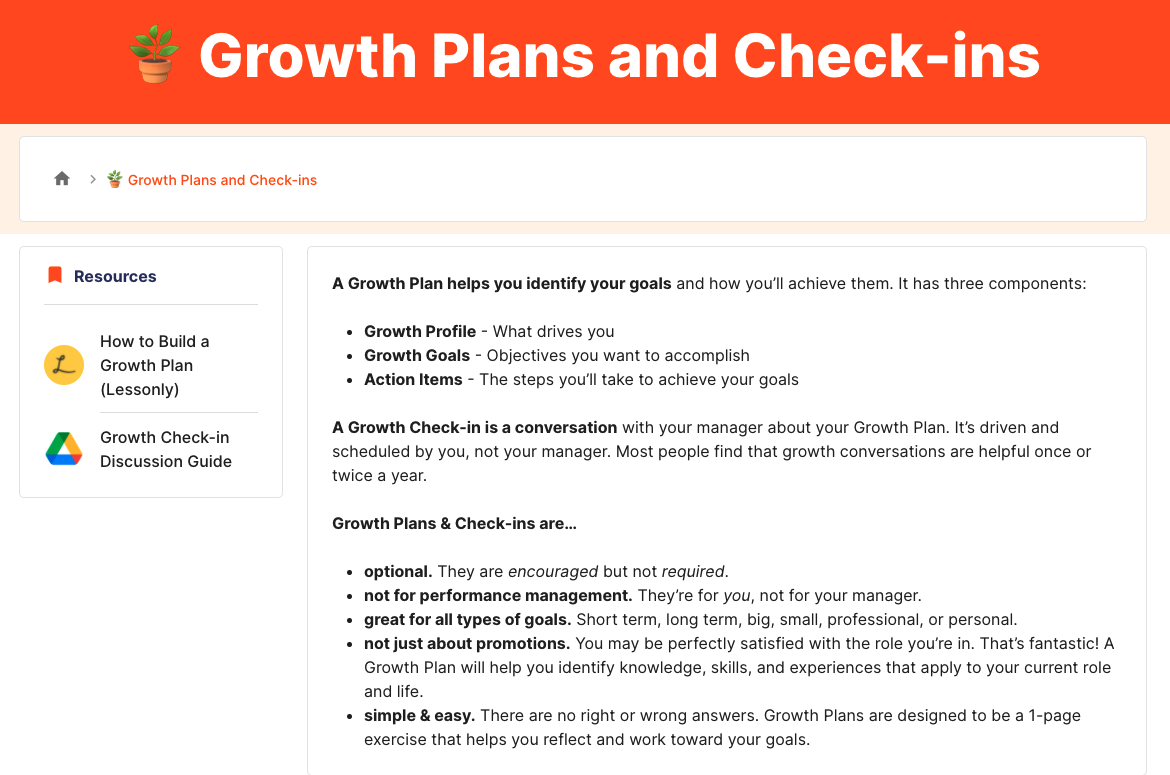 100% of open roles are posted on our internal job board. Zapier teammates can apply to open roles directly from that page after discussing with their manager. We also have internal visibility into all roles in our annual hiring plan—including those not yet officially open.

We've created "Career Pathways" to help teammates learn about and pursue roles at Zapier outside their current team and growth trajectory. Folks can learn what different roles are like, if they might be a good fit, and what skills they'd need to develop to succeed in that role.

For Zapier teammates exploring roles outside of Zapier

Of course, Zapier's Talent Acquisition team also supports teammates looking for roles beyond Zapier. We want to help our people grow their careers—whether that's at Zapier or elsewhere.

We first ask teammates thinking about exploring roles outside of Zapier to share this interest with both their manager and their People Business Partner, a People Ops team member dedicated to talent and culture strategy.

After doing that—or, if folks aren't comfortable with that first step—they can email a dedicated Zapier email address expressing their interest in exploring external roles.

Messages sent to this email address are received only by three people: our Chief People Officer, Brandon, and our two recruiting managers. All conversations are confidential within that group until the person gives us permission to pull in others to help.

We've already had a few people reach out for these conversations. In each case, they've shared their career interests, and we've looked at Zapier's upcoming hiring plans together to identify potential opportunities and pathways within Zapier. We've also identified next steps: informational interviews, conversations with different hiring managers, and reviewing job descriptions together to see where their skills align.

If the person allows us to open the conversation to a limited number of other folks on the team, we'll do everything we can to prepare them for their next role.

We provide this same job search support to any Zapier teammate whose job is affected as a result of a team re-org or who is leaving their role for performance reasons. The only folks who won't receive this kind of support are teammates who leave due to violations of our code of conduct.

When someone joins Zapier, they choose us as the right place to grow their career, and we want to reciprocate that trust through how we support our teammates at every stage of their Zapier experience—all the way through becoming an alum.

And in the end, it's a win-win. The teammate has a better experience and is more set up for success, and their manager, team, and company can better prepare for departures. We don't want to see our people leave, but when they do, we want to be sure they flourish.

Everyone will have a "next job" eventually—whether at Zapier or another company. This kind of support should be the norm. Recruiting teams should not solely be used to fill roles. We can and should be true partners in not just hiring but retaining and growing our talent.