A Successful Job Search Requires Strategy. Learn How To Approach It In The Best Possible Way!

Your Curriculum Gaps May Not Be Deal Breakers! Get Through Them With These Tips

How to Handle Microaggressions at Work

During a busy day at work, a young salesman walked into the office space that five of my female coworkers and I shared and said in a flirtatious tone, "I have to send out this letter but my handwriting isn't so great. Which one of you ladies has the prettiest handwriting and can help me out?"

After our team leader reminded him that none of us were his personal assistants and he needed to do it himself, we all looked at each other in disbelief. Did he really think that was okay to say? We are all working hard, the phones are ringing off the hook, and he really thinks we should stop what we are doing because as women we may have "prettier" penmanship? Are you kidding me?

Ah, microaggressions. These statements may seem innocuous at first as they are often made in jest, but when you are on the receiving side of a microaggression, you know that the statements are actually not innocuous at all. They are insidious comments that tap into stereotypes and biases. They can be gender-based, racial, ageist, or anything that is wrapped in stereotypes or biases against marginalized communities.

"So nice to meet you, Jennifer. So what is your Chinese name?"

"Ugh. Are we really doing the "pronoun thing" here?"

"Let's leave all that tech stuff to the younger staff, wouldn't want you to get confused. Just kidding!"

"Girls are so much better at planning these office birthday parties. I'd just mess it up".

"I don't know how you wear a hijab to work everyday, it seems kind of oppressive"

It's easy to laugh along or just ignore a nasty comment and try to let it go, but if you feel hurt by the remark and comfortable speaking up, then you should do just that. This is an opportunity to call out something wrong so that it doesn't happen again; it also tells your colleague that you are not a doormat or a punching bag.

If it is a coworker who is typically problematic, write it down along with any other microaggressions you've heard them use and take the issue to HR.

If this is your first bad interaction with this person and you don't know them well, make it clear that you did not find their statement humorous by not joining in on the laughter and removing yourself from the situation.

If you have a general positive working relationship with someone and they say something undercutting and biased, take it head-on by asking "what did you mean by that?" or "hmm, I didn't get that joke, can you explain that to me?" It's simple, you can keep a kind and inquisitive face and let them stumble as they try to explain. They will likely feel embarrassed and will backtrack what they were trying to say.

In these moments I like to channel the Willy Wonka, "tell me more" meme. As in, "Please, tell me more about how that misogynistic comment was work-appropriate. I'll wait." 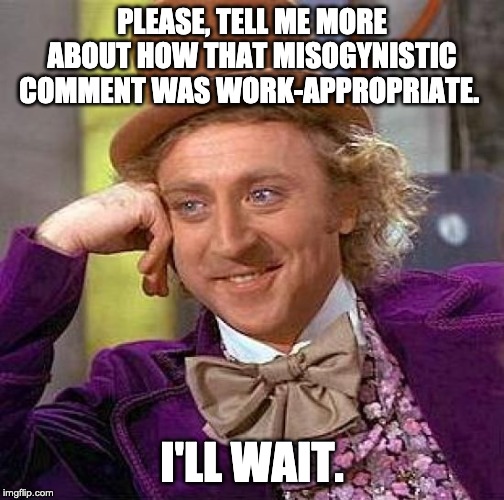 Talk to the person one on one

If you typically have a good working relationship with the person in question and you felt like there was no ill intent behind what they said, talking to them one on one is a good way to help them see the impact of their words.

Similar to what I mentioned in my article about handling racism at work, be mindful of the words that you use that can stop an open dialogue. Words like "racist", "sexist", "bigoted", "transphobic" etc., are all words that hold a lot of power so be sure to use them with care if using them at all.

For example, "When you called Jeremy's pink outfit 'fabulous' with that accent, it sounded homophobic," will certainly grab their attention, but will likely put them on the defensive, potentially slowing down a meaningful conversation.

Instead, try "I think you were trying to compliment Jeremy on his outfit or maybe you were just being funny, but the way you said it tapped into a gay stereotype and that wasn't cool. I don't think it was your intention to be hurtful, but that's not an okay thing to say to anyone who is gay or to joke around that someone may be gay because of what they are wearing."

Dealing with the backlash

Even the most down to earth, kind people may get defensive and panic when they are told that they are doing something offensive, particularly if in their mind it wasn't a "big deal." They may fire back saying that you are too sensitive and are blowing things out of proportion.

When responding to someone else's defensiveness, it's important that both of you feel listened to. One way to do this is by letting them know that you hear what they are saying, reiterate why what they said can be perceived as wrong and let it go if the conversation is not being productive.

Someone else's defensiveness typically comes out of their own fear of getting in trouble or being "found out." Don't let their defensiveness shake you up. Let it roll off your back, take note of what happened in case you need to address it later, and then move on.

Getting into a heated debate at work is not going to help you drive your position forward. But staying calm, being informative, and standing up for yourself and others does.

I believe that most people want to do the right thing. I also believe that people don't know what they don't know, so if we let microaggressions go without saying anything we are taking away a learning opportunity away from someone.

When someone says something that is coated in stereotypes and ugly biases and we say nothing, what we are actually saying is, "this is fine." Don't accept that. You have a lot of control over the tone and culture of your company—help set it right when you experience a microaggression by speaking up.

Katie Dillon has many hobbies. During the pandemic, she picked up candle and jewelry making, opened an Etsy shop, learned new watercolor techniques, and poured hours into maintaining her vegetable garden.

And recently, her interest in the lindy hop community has been resparked. “Swing dancing is something I enjoy doing,” she shares. “I used to travel for dance every other weekend. It was a huge part of my life. And I recently got inspired to get back into it.”

Empowering Success on the Global Business Group Team in India

This post was originally published on the Meta blog. Go to Meta's company page on PowerToFly to see their open positions and learn more.

Editor’s note: The following post is by Shweta B., Vertical Head for Financial Services, Media, Travel and Professional Services, in India. In her own words, she describes four core characteristics that empower client partners and client solution managers on the Global Business Group team to succeed.

Tiffany Witwer from Elastic is a proud mom of three.

“I enjoy being a parent because it teaches me patience and it gives me a different perspective,” she shares. “It allows me to be more present, laugh more, and appreciate the small things.”