How This Engineering Manager Is Pushing Back on Imposter Syndrome

Kickstart Your IT Career with Freddie Mac

Below is an article originally written by Tag Savage at PowerToFly Partner Quip, and published on May 31, 2018. Go to Quip's page on PowerToFly to see their open positions and learn more.

In our spring feature roundup post, we noted that we'd removed all references to gender throughout our product. To quote that post: "We briefly considered a simple switch from gendered to gender-neutral pronouns, which would have worked fine for people who are using Quip in languages that have gender-neutral pronouns, but we wanted to be inclusive for all users. After analyzing the problem from an internationalization perspective, we decided that removing personal pronouns entirely was the best solution." In this post, we'll expand a little more about why and how we did this.

Why remove gender pronouns from our product?

Because Quip doesn't need them. We only used pronouns like "his" or "her" in a handful of places, but to use them at all we had to know a user's gender. Quip user Hunter Stevens pointed out this problem in a Tweet, and got us thinking about what could be changed. 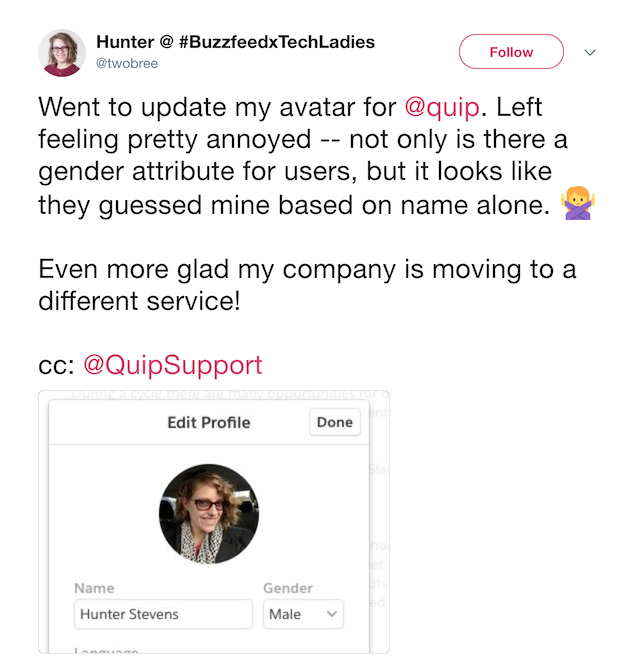 Some history here: In very early versions of Quip, we didn't even let people pick their gender—we just guessed based on their first name. And, as you can imagine, we got it wrong sometimes. But rather than fix the underlying problem, we just added the Gender dropdown you see in Hunter's screenshot.

Instead of having this unnecessary interface, we thought, why not rewrite the copy to make the pronouns themselves unnecessary?

How did we make the change?

Easy enough—we just switched up copy in the notifications that needed changing. Here are a few examples.

When someone took themselves off a document, there used to be a line in the document's activity log that read:

This one didn't take much discussion. "Removing oneself" is kind of an odd and hostile way to describe this interaction. You wouldn't "remove yourself" from your office, after all—unless you were causing some kind of trouble. So that was no good. Much easier, more natural, and gender-free to simply say:

Now when you leave a document, you just leave it, like a non-troublemaker would.

Opening a document from a phone

If, however, Francine opened the doc on her phone, the notification would read:

For some people, this distinction seemed kind of random. Who cares where they opened it? Quip works just as well on phones as it does on computers—what does it matter if they opened it on their phone? But for others, the distinction was useful. If they saw that someone was on their phone, then they'd probably cut that person some slack about getting back to them promptly.

Hesitant to remove this particular vector of information, we considered switching to the gender-neutral (and increasingly embraced) singular they:

That would have been fine for our English speaking users, but Quip isn't just for English speakers. We localize our app to 12 different languages (13 if you count American and British English separately), and not all of those languages offer gender-neutral pronouns. Taking that into account, it wound up being more practical to eliminate the pronoun entirely:

Yes, using an indefinite article is a tiny bit more awkward (whose phone? the overthinker might wonder). But it helpfully preserves a potentially useful bit of data while also-helpfully discarding a distracting and unnecessary pronoun. Moreover, it can be localized consistently, without being gendered in some languages and neutral in others. All in all, it's an indisputable improvement.

With the notifications taken care of, we could get rid of the "Gender" dropdown in the user profile. Now it looks like this:

And that's it. Not only a more equitable product, but a more streamlined one as well.